Celebrating the Evolution of Women in Marketing - Dream Factory

Celebrating the Evolution of Women in Marketing 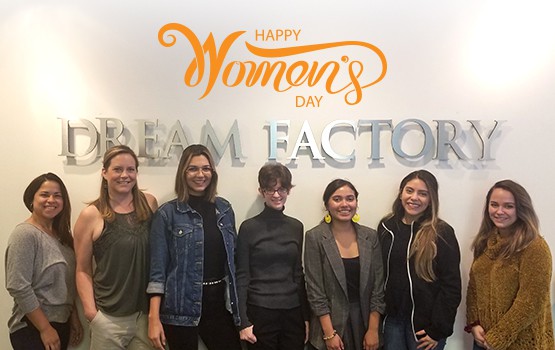 Today is the 108th International Women’s Day, and we’ve come a long way from the Mad Men era of marketing. In fact, women make up 50% of those working in advertising, and that number has stayed stable for the past few years. Here at Dream Factory, women make up over half of our team!

Despite the fact that most advertising is marketed towards women, however, only about 11% of creative directors are women. You can still see plenty of advertising where women are primarily homemakers, caretakers or eye candy, despite women making up half the modern workforce. These ads not only don’t resonate with most female viewers but often alienate the demographic with the most spending power. As one article noted, there are still way too many women doing laundry in advertisements.

At Dream Factory, we talked internally about how women are seen in marketing and advertising and shared our thoughts on the evolution of women in marketing today.

Women in the Mad Men Era

It’s an open secret that marketing agencies were a boy’s club during the “Mad Men” era. This showed not only in who got hired, but how advertisements written by men attempted to understand a female audience. Cars were marketed to women based on cosmetics (“Wear a Mustang to Match Your Lipstick”) and handbags (“From the Collections of The Henry Ford: Motor Mates Handbags”). When these types of ads failed, it’s easy to wonder if this could have been avoided entirely if more women been part of the creation process.

So that’s exactly what some car companies did.

Chevy hired Dannielle Hudler as their advertising chief, where she was part of their first serious program to advertise to women. Before her arrival, women in their advertisements were “either in the passenger seat or in bikinis across the hood of a Corvette.” Hudler was joined after by Chevy’s director for truck advertising, Candace Haag, where they made a deal to only ever disagree behind closed doors. “Being average wasn’t good enough,” Haag said to AdAge. “You had to be the best.”

Take for example Susan Credle, the woman behind M&M’s mascot characters and Allstate’s “Mayhem” ads. Before Credle was awarded with accolades like CAF’s Chicago Ad Woman of the Year, she started as a secretary for the agency BBDO. Now, she’s the Global Chief Creative Officer at FCB and has worked with accounts like Pepsi, FedEx and Visa. Her successful career story is often considered the inspiration for the TV show Mad Men’s Peggy Olson. Still, there were difficulties in starting in a male-dominated workforce.

Without these first women willing to push forward in a “mad men’s world,” the marketing landscape would most likely look quite different today.

In 2019, there’s no shortage of women creating a name for themselves in marketing. Facebook executive Sheryl Sandberg’s book, Lean In, is often credited with inspiring a generation of female professionals in marketing and elsewhere to “lean in” to their success.

Many of the most well-known women in the game today aren’t just known for their marketing savvy, but for their thought leadership both online and offline. Some of our favorite educational webinars and articles at Dream Factory are from MarketingProfs, which is run by their Chief Content Officer, Ann Handley.

“In marketing, it’s essential to always be learning,” says Stephanie S., our Marketing Copywriter. “One of the first things I did as a copywriter was subscribe to Copyblogger and read everything I could by Sonia Simone. She writes with such a clear, sincere desire to help people learn and improve, no matter where they’re at in their journey.”

Not all role models in branding are strictly “marketers,” either. When asked who inspires her, our Marketing Coordinator Lysette G. said, “Oprah is someone who has inspired me professionally and personally. She has built her career when circumstances weren’t optimal for a woman in her time. She’s inspired me with the passion she puts into her brand, her work and the love she has for other people.” If you haven’t heard her podcast, “Supersoul Sunday,” we encourage you to take a moment and listen.

As technology becomes a larger part of marketing and other careers around the world, organizations like Reshma Saujani’s Girls Who Code are also working to bridge the gap between the sexes in engineering and computer science. In six years, they’ve reached almost 90,000 girls of all backgrounds across the United States. “We are on track to achieve gender parity in computer science by 2027,” says Reshma. “It’s incredible. But for us, parity is really just the beginning.”

[bctt tweet=”Having women to aspire to as role models is one thing, but the most important aspect of encouraging any individual’s growth and success is through mentorship.” username=”dream_factory”]

Having women to aspire to as role models is one thing, but the most important aspect of encouraging any individual’s growth and success is through mentorship. At Dream Factory, we’re constantly encouraging one another to succeed as a team.

“It’s important for women to stick together and support each other in the workplace.,” says Denisse L., our Marketing Operations Manager at Dream Factory. “By encouraging each other, we contribute to the progression of women reaching their professional goals in their careers.”

Who is Inspiring You On International Women’s Day?

Connect with Dream Factory on social media to tell us what you think.