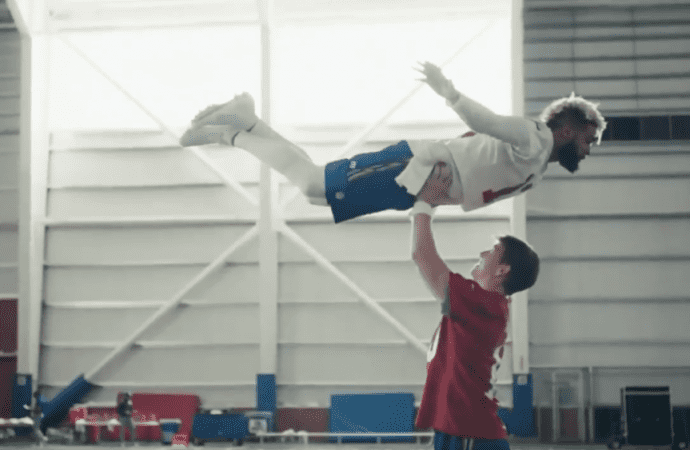 And Why We Can’t Stop Talking About Them It’s that time of year again—the Super Bowl! While some people were cheering for the Patriots or the Eagles last night, the marketing world was watching the Oscars of advertising. Think we’re exaggerating? According to a report by Sports Illustrated media writer Richard Deitsch, NBC received about

And Why We Can’t Stop Talking About Them

It’s that time of year again—the Super Bowl! While some people were cheering for the Patriots or the Eagles last night, the marketing world was watching the Oscars of advertising. Think we’re exaggerating? According to a report by Sports Illustrated media writer Richard Deitsch, NBC received about $5 million per 30-second commercial!

It’s been said that the average American encounters 4,000 ads a day, so one of the most difficult things for any advertiser is to catch a viewer’s attention with something new and fresh.

Which commercials did just that? Read on to see Dream Factory’s five top Super Bowl ads of 2018!

Tourism Australia decides to switch things up by giving you a fake trailer for Australian action film “Dundee,” starring Danny McBride and Chris Hemsworth. By the time you’re lulled into the plot, expecting yet another predictable box office hit, you realize the “pristine beaches,” “amazing wines,” and stunning views of the Sydney Opera House from a “world-class restaurant” have nothing to do with a film at all.

“This isn’t a movie,” Danny McBride himself exclaims, looking around a restaurant in surprise. “It’s a tourism ad for Australia!”

How can any of us feel duped when Hemsworth flashes that charming, apologetic smile?

Tourism Australia puts its product—the beautiful country of Australia—front and center in nearly every frame. Unlike several other commercials of the night, the ad’s gimmick doesn’t detract from its overall goal, and the casting of Hemsworth and McBride (complete with a well-timed cameo from Paul Hogan) makes for enjoyable viewing that keeps you from flipping the channel.

In fact, this ad was so successful, there’s currently a petition to make “Dundee” a real movie. Crikey!

Who knew that Peter Dinklage and Morgan Freeman lip syncing to Busta Rhymes and Missy Elliott was marketing brilliance? Answer: Doritos and Mountain Dew did. The sheer originality of this premise alone gets people talking, while the popularity of all four performers keeps plenty of eyes glued to the screen. Both Dinklage and Freeman put their all into their performances, and the “Fire” and “Ice” focus of the ad was a clever nod to Dinklage’s role on Game of Thrones while being a fun play on the words “spit fire” and “ice cold.”

Both Mountain Dew and Doritos share a similar market demographic, so this collaboration was a smart one. Just like in the “Dundee” ad, the product is clear from the get-go here: Peter Dinklage and Morgan Freeman both take a moment to enjoy their Doritos and Mountain Dew before showing off their rap skills. The shared hashtags #SpitFire and #IceCold show that both companies planned for this to be a home-run on social media, and the “only one can win” tagline suggests that this is the start of a new (and we think successful!) marketing campaign. Could Freeman get a direwolf and Dinklage ride in on a dragon next time?!

3) “Dirty Dancing” with the NFL

No one understands a Super Bowl commercial like the NFL, and that shows in their latest light-hearted commercial. The New York Giants might not have made it to the Super Bowl, but Odell Beckham Jr and Eli Manning win the night with their dance moves in this perfect homage to Dirty Dancing. Viewers definitely had “The Time of Their Life” watching Beckham leaps into Manning’s arms in the iconic lift from the 1987 film.

This is the perfect audience for the NFL—if you aren’t watching the Super Bowl, it’s safe to say you’re not a football fan. The casting is spot-on, with Beckham being known for his touchdown dances and Manning being one of the most playfully joked about players in the NFL. Beckham and Manning have a good sense of humor about their roles, and you can tell they’re having as great a time twirling on the field as we are watching them. It reminds everyone that in the end, football isn’t just a competitive sport, but just plain fun—and by focusing on entertaining the audience, this ad does just that.

Okay, Harbour doesn’t literally go into the Upside-Down like in his show “Stranger Things,” but it’s safe to say this Tide ad turns the typical notion of the “Super Bowl ad” on its head. How? By making fun of all of them. Harbour talks directly to the viewer through a series of cliché, well-worn commercial tropes that we’ve all seen a million times before, interrupting to remind us that, nope, “This is a Tide ad.” Each of these jokes lands perfectly, and boy there a lot of them, making for an impressive full minute of laughs.

Tide knows what you expect from your basic detergent commercial: reliable, slightly dull but comfortable family shenanigans where dirty clothes are saved by the power of Tide. That doesn’t make much of a splash in the flashy world of Super Bowl ads. By saying “every ad is a Tide ad” thanks to how clean everyone’s clothes are, Tide gets to play with a lot more material than they would in their normal sandbox. Harbour’s likeable sense of humor is the cherry on top of a clever, well-thought out campaign that finishes with a hashtag worth trending: #ItsATideAd.

1) Alexa Loses Her Voice & Celebrities Save the Day

Flu season is the worst—and this time, it’s claimed even Amazon’s clever device, Alexa! Having lost her voice, celebrities fill in to help Alexa answer people’s burning questions—and the results, well, are pure comedy. Gordon Ramsey yelling at someone who wants to make a grilled cheese sandwich is genius, as is Cardi B refusing to play country music, and Rebel Wilson “setting the mood.” Anthony Hopkins’s cameo is the most surprising (and the most unexpectedly hilarious), complete with feeding skittles to a peacock. After him, we’re a little relieved that Alexa will be “taking it from here”!

This ad shows all the different ways people use Alexa in their everyday lives, and makes them funny with celebrity reactions. Even if you’re not familiar with Amazon’s voice-activated device, this commercial shows you just what makes her so useful, and does so with a likeable cast of well-known performers. Even better, Amazon founder and CEO Jeff Bezos stars as he is reassured by his staff that the replacements are ready and able to step in for Alexa. Ultimately, this ad shows us just why there’s no replacement for the real Alexa—while hinting that Amazon might have some new voice-related tricks up their sleeve.

All in all? This list gets a touchdown from all of us at Dream Factory. Way to play!

Want to know more about Dream Factory’s analytical, results-driven marketing solutions?  We’re here to provide the strategies you need. Contact us and learn what options are right for you.